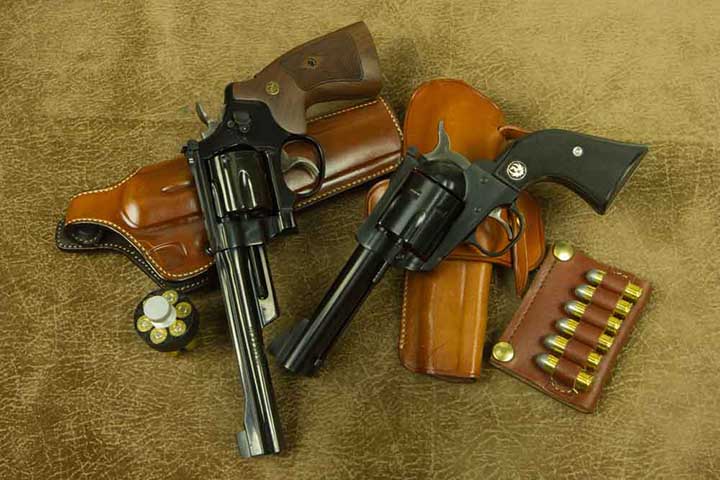 The legendary .45 ACP cartridge was designed by John Moses Browning more than 100 years ago. However, this cartridge is still a favorite for modern law enforcement and civilian shooters alike.

Ammunition has come a long way in the past 100 years, and today’s shooters have literally hundreds of options to choose from. Variety is definitely the spice of life as well as ammo. However, with so many options on the market, finding the best .45 ACP ammo for your specific weapon and shooting endeavors can be a dizzying venture. The array of options is enough to leave even the savviest shooter feeling dazed and confused. Don’t worry. We’re here to help.

While only you can decide which ammo to use in your .45, we’re going to break down some key things to consider in your search. And before we wrap it up, we’ll share a few of our favorite loads to get you started.

Finding the Right Ammo for Your .45 ACP

When you hear the words “.45 ACP”, most minds instantly think of the iconic Colt 1911. A highly effective weapon, these all metal .45s helped win two world wars.

While there is certainly still a place for the old-school 1911, modern shooters can also opt for lighter, polymer options like the Glock 43 or Springfield XDs. Both options are lightweight and have a single stack design that make them more practical options for concealed carry.

However, lighter pistols can have recoil issues, especially when shooting heavyweight projectiles. Some shooters prefer to use lighter, 117-grain projectiles when shooting lightweight polymer pistols. The only way to tell if recoil will be a major issue with your .45 is to test drive a few loads to see how they feel and function.

Most .45 ACP loads will feature either full metal jacket (FMJ) or jacketed hollow point (JHP) projectiles. Although you may be able to find some target loads made with semi-wadcutter bullets for paper targets, most modern loads are made with some version of either FMJ or JHP bullets.

FMJ projectiles are made with a metal jacket usually made of copper that surrounds a softer lead core. The Geneva Convention specified FMJ ammunition for military use, because it is designed to injure rather than kill. For civilians, FMJ loads are best suited for targets and competition for the same reason. FMJ bullets are known for deep penetration and often pass straight through soft targets.

Jacketed hollow points work better for self-defense shooting. Like full metal jackets, JHPs feature a copper jacket encapsulating a lead core. However, JHPs have a hollow cavity instead of the stereotypical round nose. When met with resistance (like soft tissue), the cavity spreads apart causing the bullet to expand. This expansion creates a massive wound channel and also slows the progression of the bullet as it moves through the target.  Because JHPs create a ton of tissue damage without many of the dangers of over penetration, they are much better suited for home defense and EDC use.

What constitutes the “best” .45 ACP ammunition mostly depends on how you plan to use it. You’ll need very different performance when plinking than you will when dropping whitetails with your .45 ACP. To help, we’ve broken our list up into loads that work best for specific shooting applications.

When it comes to target shooting, it’s hard to beat a good FMJ (full metal jacket) round. They are generally cheaper than hollow point self-defense loads, so you don’t need to worry about the cost of high-volume practice. They are usually more readily available, too.

FMJ rounds also tend to leave less lead residue in your weapon. That means you can spend more time practicing your shooting skills and less time cleaning up your handgun afterwards.

CCI’s Blazer Brass is perfectly priced for high-volume practice shooting. These are some of the cheapest practice rounds you can get that will still perform reliably. While they don’t offer the level of precision accuracy you’ll want for competition, they work nicely if you need to spend some serious time practicing your shooting fundamentals.

Blazer Brass .45 ACP rounds feature 230-grain FMJ round nose projectiles that leave the muzzle at a consistent velocity of 830 feet per second.

Blazer also manufactures an even cheaper practice round that is loaded in aluminum cases. Although, the price tag is definitely cheaper, the aluminum-cased ammo can sometimes cause cycling issues, so make sure you pick up the Blazer version made with reloadable brass.

Another highly affordable option that doesn't compromise on performance or reliability is PMC’s Bronze line. PMC is a South Korean Company and one of the world’s largest ammo manufacturers. The company also manufactures all the individual components used to assemble their ammo from sourced raw materials. This gives them an incredible amount of control with regard to product quality, while also making it easier to keep the price low.

PMC Bronze .45 Auto is made with 230-grain FMJ bullets. These rounds are highly consistent, and projectile weight varies no more than 2/10s of a grain between rounds. If you need an affordable round that delivers highly consistent performance, PMC Bronze is hard to beat.

If all you’re going to do is plink soda cans off fence posts, any cheap ammo will do. However, if your shooting application demands something with a little higher quality, Winchester Service Grade is a great option. This ammo is actually military grade production overruns. If our service men and women can trust their lives to this ammo, you can definitely trust it for even your most demanding range day.

Founded in 1922, Federal American Eagle is some of the best practice ammo available to the modern shooter. This subsonic ammo is designed to reach its ballistic peak in suppressed .45 handguns. By utilizing special propellants and primers, Federal manages to create a load that doesn’t produce the tell-tale “crack” that even the best suppressor can’t silence with supersonic ammo.

Perfect for training on indoor practice ranges, Federal American Eagle Subsonic ammo allows for quieter shooting without compromising accuracy or reliable function. Use these rounds in any .45 with a suppressor and your ears will definitely thank you. So will your fellow shooters at the gun range.

Best .45 ACP Ammo for Self Defense

Although specifically engineered for Law Enforcement, Federal Tactical Bonded LE is also a smart option for civilian concealed carry. These American-made rounds feature 230 grain bonded hollow point projectiles that produce massive expansion (approximately .86 inches) and impressive penetration (14.6 inches on average), which is slightly better than average thanks to the +P overpressure loading. Projectiles, propellant, and primers are loaded into nickel-plated brass cases for smooth function and high-visibility, even in low light conditions.

Winchester Supreme Elite PDX1 Defender is the primary service ammo of the FBI (although they use it in .40 S&W instead of .45 ACP). If this is what the FBI uses, you know this stuff offers some seriously effective performance. PDX1 jacketed hollow points are engineered to deliver extreme terminal performance and can crash through tough FBI barrier tests like there’s no tomorrow.

The jacket is electro chemically bonded to the lead alloy core through a process that virtually eliminates core/jacket separation. The jacket is also scored to assist in terminal expansion. As a result, these effective JHPs offer reliable, massive expansion while driving deep into soft targets.

Federal HST bullets are extremely popular for self-defense. These jacketed hollow points are designed to expand reliably, even after passing through tough barriers. This means they won’t plug up and fail to expand, even when shot through thick, heavy clothing.

The jacket and core of HST bullets hold together well for excellent weight retention. This allows them to drive deep into soft tissue without the danger of over penetration.

Speer Gold Dot has been a popular choice among law enforcement officers since the 1990s. It has a hard-earned reputation for reliable function, consistent expansion, deep penetration, and nearly 100 percent weight retention.

Gold Dot Short Barrel loads offer all the function and performance the Gold Dot name is known for, only this version also features heavyweight bullets to maximize performance from short barrel weapons. These loads are also designed to function reliably in sub-compact pistols, making them a near perfect option for concealed carry.

Hornady’s famous XTP projectiles are basically jacketed hollow points on steroids. XTP stands for eXtreme Terminal Performance, and these bullets definitely deliver. Each 200-grain projectile features jacket serrations that divide the bullet into symmetrical sections. Because the jacket is pre-scored, the bullet mushrooms violently as it passes through soft tissue.

Unlike some other jacketed hollow point designs, the gilded jacket on XTP projectiles completely encases the nose. Because there is no exposed lead, XTP loads perform flawlessly in modern semi-automatics.

While a .45 ACP handgun may not be the best option for hunting, some hunters enjoy the challenge. Although you can technically use a standard self-defense load for deer hunting, you should probably opt for +P loads with heavy projectiles so you get penetration deep enough to reach vital organs. You’ll also want to keep your shots within fairly close range for ethical results.

Some states have hunting regulations that limit what type of handgun loads you can use to hunt certain types of game. Be sure to do your homework and become familiar with local laws before you head into the field.

Here is one of our favorite .45 ACP loads for hunting.

Buffalo Bore also uses flash retardant powders in these loads. Since deer and other game animals are most active in low light, these loads won’t blind you when you make a critical shot at close range.

We are always hesitant to formulate these “best of” lists when it comes to ammunition. There really are a ton of variables that come into play - including your shooting application and the specific handgun model you’re using. The only surefire way to find out which load will work best for you, is to test drive a bunch of options and see how they perform in your weapon.

Once you’ve found the best .45 ACP ammo for you, the next step is to practice, practice, practice. And when you’re done, you should probably practice some more. Ultimately, proficiency with your pistol is your best weapon. Proficiency is something that doesn’t come in a box and can only be honed on the shooting range. 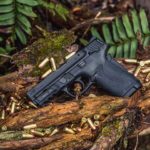 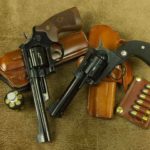 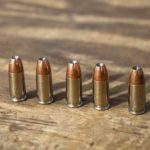 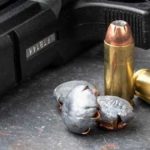